We’d love for you to repost this link on facebook, moto bulletin boards, local moto clubs and email listservs, or just email it around to your moto buddies.  That’s what we’re hoping will happen.  As long as the people signing up have bikes and love to ride them, we’re happy to send out thousands of these if we can.  I just ordered 200 more.  Any great ideas for somewhere to promote this?  Let us know, or better yet post the link yourself.  Who wouldn’t want a free P-38? 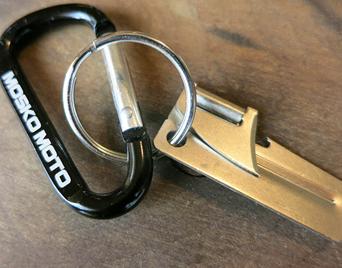 If you’ve never heard of a P-38, it’s this really badass little can opener that was designed by the US military in 1942 for K rations in World War II.  The P-38 was standard issue with military meals for over 60 years before the MRE (Meal Ready Eat) took over.  These little tools, nicknamed the “John Wayne” in the military, are legendary for reliability and toughness.  Andrew and I were looking for a cool giveaway and I remembered this surplus P-38 I had for 10+ years when I was a kid.  Um, yeah… perfect!!

We’re doing this promotion for two reasons: 1) we’re trying to build a mailing list of riders in anticipation of having some product to sell soon and 2) we want to learn more about who is following our blog and advrider.com thread, and how far their network extends.  The advrider thread has had over 42,000 views, which is a lot.  We’re curious who you are, where you’re located, what kind of bike you ride, and what ideas you might have for us.  So we’ll trade a few hundred (or thousand?) P-38’s to find out.  Everyone needs a P-38 right?  Coolest little backcountry utensil ever.

Learning more about this network is particularly timely because we’ve decided to sell direct-to-consumer.  Originally we just kind of assumed we’d be selling through retailers/distributors since that’s how other companies do it.  But as we watched the online response and feedback building over the last few months we started wondering: why sell through retailers if we can connect directly with riders?  Retailers take a 35-50% markup, so our products would cost nearly double in stores, plus we’d be one-step removed from the customer.  We posed this question on advrider.com and the response was overwhelmingly in favor of selling direct.  So that’s what we’ll do.

Until now we’ve been focused solely on the designs themselves, while sales, marketing, warehousing, etc seemed way off on the horizon to be dealt with later.  Now that we’re about to place our first purchase order, which is a lot of money for us, suddenly the “later” is now.  Nothing brings sales into focus like owning a bunch of inventory.

For packing/shipping, we have some good friends in Hood River with a really cool ski/snowboard brand that’s been growing fast (Trew Gear.  FYI their post season sale is on, 45% off everything. Check it out, seriously good stuff).  They started 5 years ago and since then have experimented with a couple different warehouse options, mostly picking/packing products themselves.  Last year they switched to a third party logistics company in Portland for their warehousing and shipping.  On their recommendation, Andrew and I headed into the city for a visit.

Letting someone else handle shipping is a mental leap.  I’ve managed a shipping warehouse in the past, so this is not unfamiliar territory.  But for a small company like us, working with a third-party logistics partner can result in faster shipping, fewer mis-ships, more accurate inventory, and lower costs than we could ever hope to achieve on our own.  A lot of small companies are going this route.  Big ones too apparently, since this warehouse’s biggest customer is Nike.  By partnering with a logistics company, Andrew and I will be able to spend more time on product and design, while leaving warehousing and shipping to the pros.  We’re liking this idea.

While in PDX we also visited a motorcycle salvage yard just outside of town.  We’ve been looking for a junker bike to use in our upcoming crash test.  The idea is to test the pannier mounting system and the armor by attaching some panniers to a bike and pushing it out of the back of my pickup at speed.  Maybe when it gets a little warmer out.  We found a sweet vintage CB 175.  No motor, but it still rolls, which is all we need for this project.  Maybe we’ll put some cinder blocks where the engine would go to add a little weight.

In other news: Andrew is working hard to get our design revisions for the factory.  The revisions are small and detailed, but numerous.  Meanwhile Galen finished up the size specs for our 2015 apparel.  Factory #1 (from the last post, who I met in Hanoi) has agreed to produce our apparel, which is exciting news.  Andrew, Galen, and I Skyped with them last week to discuss fabrics and production timing.