Busy week at Mosko.  Learning a lot about bag manufacturing and materials.

We have some initial high level sketches of the panniers, but now we need to translate those into physical prototypes.  We decided that it would be more efficient to work with a prototype as opposed to trying to design everything on the computer.  In other words we will have a local seamster (who we met with this week) create the initial outer bag, and then we will work on adding features like compression straps, outer pockets, etc later once we have a physical prototype in hand.  The problem with designing everything on the computer is that a) it’s very time consuming and b) things that look good or seem to work on the computer don’t always translate into a physical product.

This local seamster we met, Chip, is a sailmaker and master seamster who lives out in the countryside with his wife in really cool little house they built from hand.  He’s extremely talented.  In addition to sailmaking he has done a lot of outdoor gear for local companies here in the gorge.  Really cool guy.

Two of the panniers we’ve seen out in the market and really like are:

Wolfman Expedition Panniers: I own a set of these and so do some of my friends.  they’re bomber construction, simple, and inexpensive.  Made out of PVC material with welded seams.  As long as you don’t tear the outer material, they’re also waterproof.  However they’re a pain to get on/off the bike, they are round (which wastes space), they have no exterior pockets or alternative access points for tools/tubes etc, and the connection straps are on the outside of the bag so they’re the first things that break if you go down.  Plus the attachment system is clumsy.  Overall though these are good bags and they get the job done. 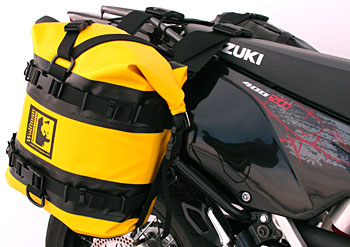 Kriega Overlander 60: These are new and I haven’t seen them in person, but they seem pretty cool.  Made from cordura on the outside and a waterproof liner on the inside, they separate the abrasion resistance from the waterproof layer, similar to the BMW Rallye jackets.  This is a cool setup because when you crash you don’t lose your waterproofness.  They also have a quick/easy on/off system unlike the Wolfman.  Plus they’re rotopack compatible if fuel carrying is an issue.  Seems like a cool system, I’d like to see one in person!  the main downside here is the price of $800.  That’s nearly as much as hard bags! 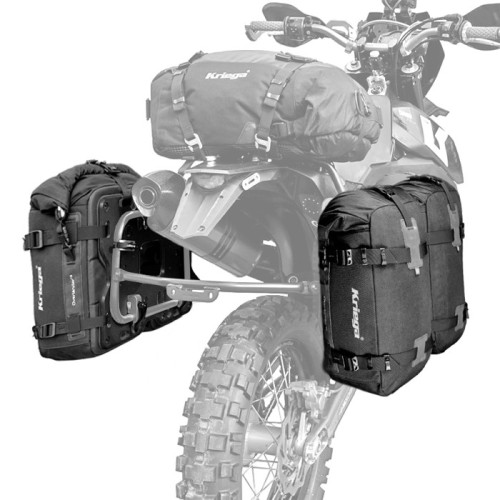 We’re researching fabrics, but in general we like the idea of separating the abrasion/waterproofness and we also like the idea of a fabric exterior (as opposed to PVC) because you can add a lot more features to fabric such as pockets, compression straps, access points, etc.  These things are very hard to do with PVC because everything needs to be welded not sewn, and welding is very limiting.

Right now we’re thinking that we’ll do an exterior in cordura or some other ballistic material and an interior from pvc.  The pvc is great because its bomber and total waterproof, so if you pull out the liner on a trip and take it over near the campfire or into you tent, you don’t have to worry about puncturing it.  The cordura is great because it protects the pvc from abrasion, and can support a bunch of exterior features.  So that’s the angle we’re taking.

With respect to the mounting system, we met with an awesome engineer this week here in the gorge who gave us some really creative ideas.  His name is Hein.  Previously we had been looking at a quick release system similar to Kriega or Happy Trails, using little metal clamps and some kind of quick releases.   Hein got us thinking in a whole new direction.  More on that to follow. 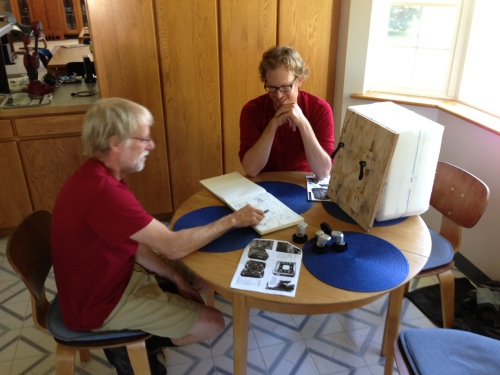 Working on the mounting system

We’re really rolling now.  On Monday we should have our initial pannier design off to Chip for pattern-making, then we’ll start building some prototypes of the mounting system out of mdf.  Our harbor freight bandsaw had some major issues this week including a blown motor, but seems to be working ok now after a bunch of retrofitting.