Greetings from Philadelphia! Ash & I are back east for my sister Nadya’s wedding. We’ll be here through the weekend, then return home for a little over a week, before taking off for the BMW MOA Rally in Des Moines, Iowa July 12-15.

Note that Mosko will not be attending the Touratech Rally this weekend. We’ve received a number of inquiries about that. We make luggage and so does Touratech, and they felt that for competitive reasons, it doesn’t make sense for us to be there selling bags that compete with theirs. Which we completely understand, although of course we’re very bummed to miss it.

Another great year at OX West!

It’s amazing how large this event is getting. Over 14,500 attendees and 365 vendors this year. A lot of that growth is coming on the adventure vehicle side rather than the motorcycle side, but it’s still a very large show even just looking at bikes alone. It’s our biggest event of the year, and we had a total blast there as always. 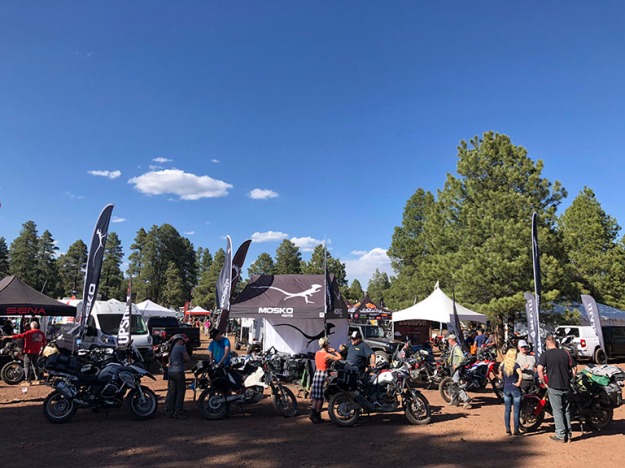 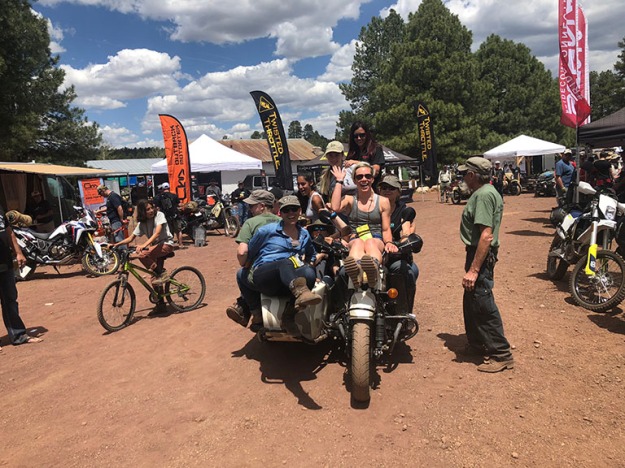 Somehow, unbeknownst to us, Ash and I ended up on the bingo board (second square down on the right side) with our #noregerts tattoos. 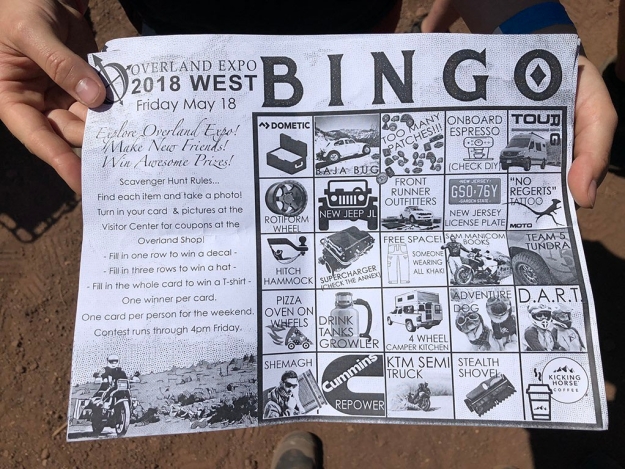 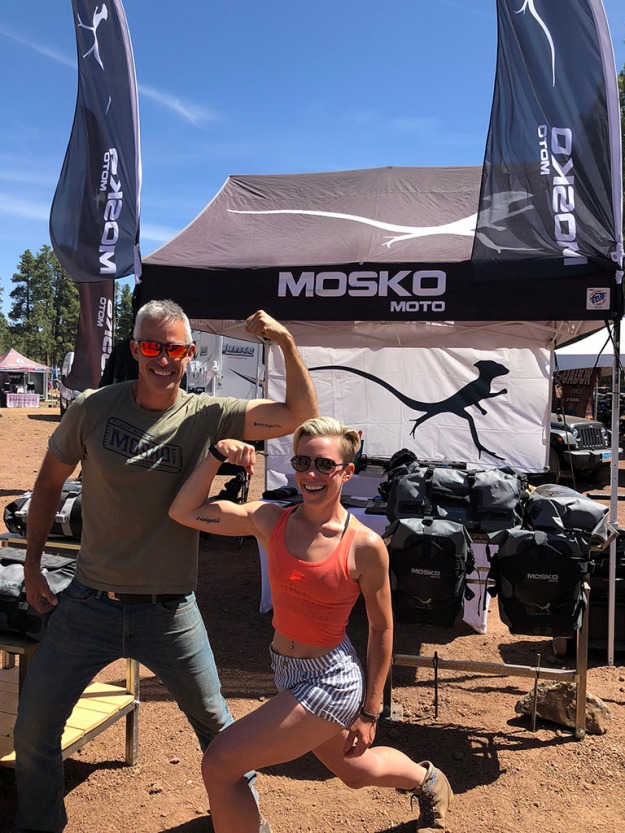 The new tables & displays we had made for shows worked out great. They’re a bit of a pain to transport, but it’s a lot easier than taking a ton of bikes to every show.

Nick Calderone from the television show Right This Minute stopped by. The story with this Mosko shirt is that he accidentally spilled bleach on the shirt but didn’t want to throw it away. So he took a moto tire, rolled it through bleach, and then rolled it over the shirt, and now he has a one-of-a-kind Mosko shirt. Good idea Nick.

Nice shot of some Mosko bags on the cover of the Ecuador Freedom Bike Rental brochure. Thanks guys!! 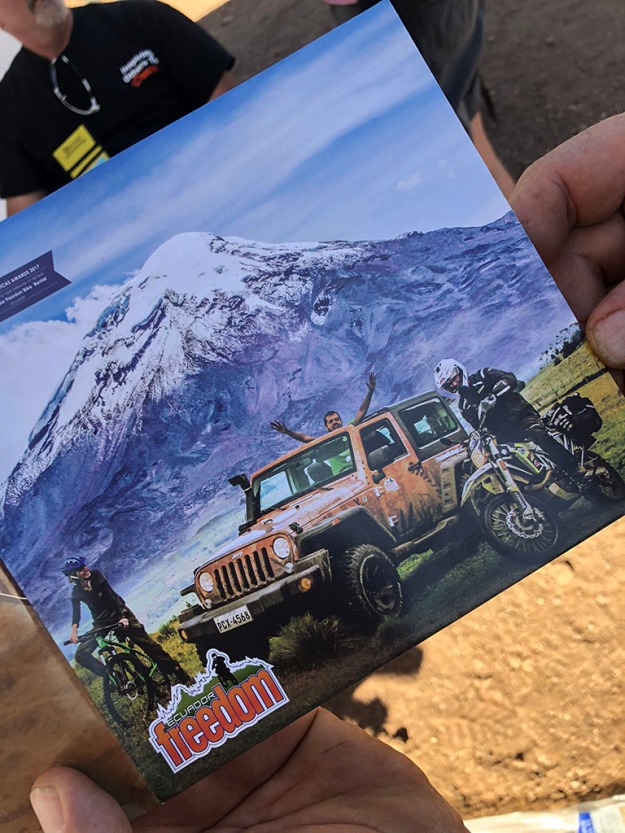 We stopped to do some mountain biking just outside Battle Mountain, Nevada on the way home from Arizona. There is some epic desert riding in Nevada. We’ll definitely be stopping here more often. 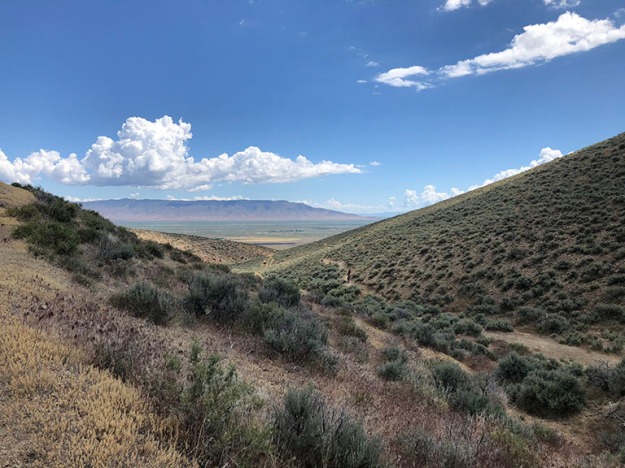 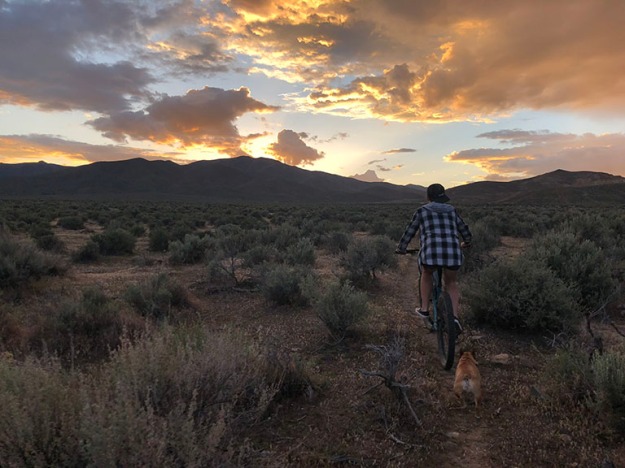 Andrew arrived at OX with approval samples of our new welded seam, waterproof Hood tank bag. The production order has been sent to the factory, we should have these in stock by Fall. They also come with a waterproof map pocket, which is exactly the same as the one on the Nomad. 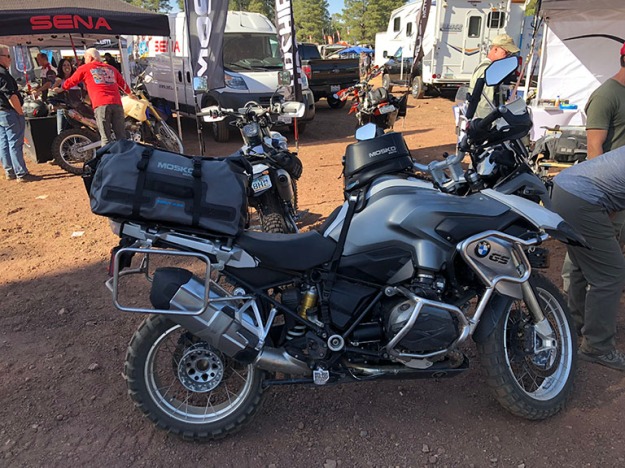 Both the Hood and the Pico have this cable pass-through port. 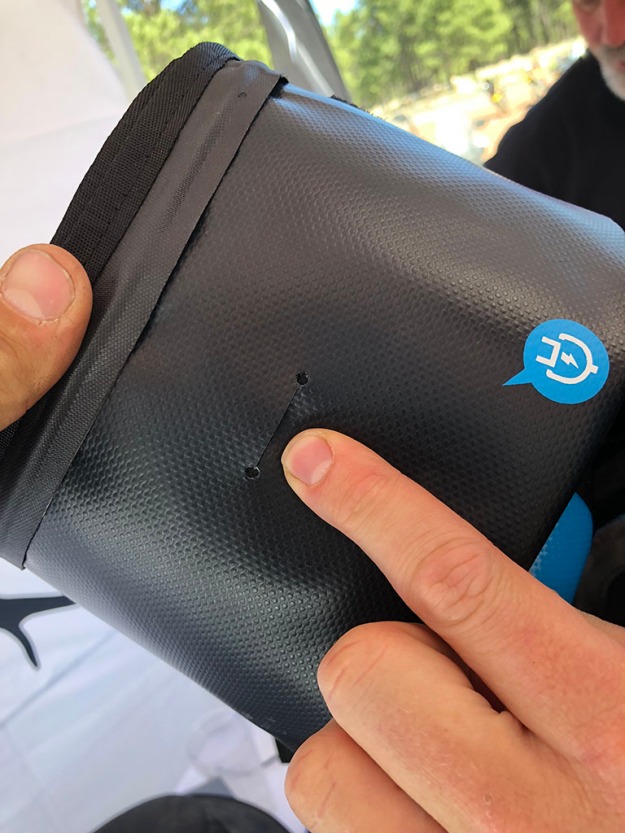 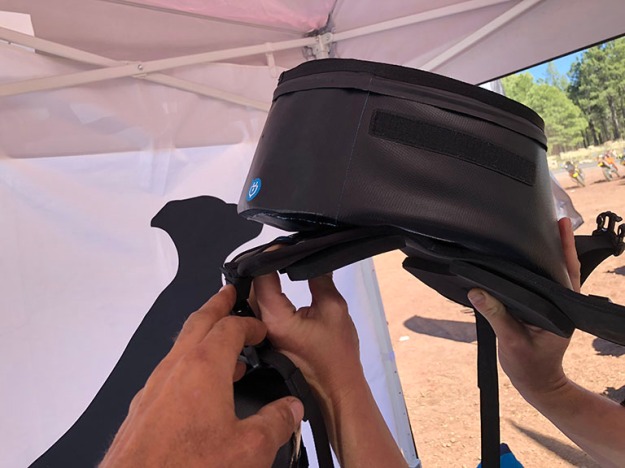 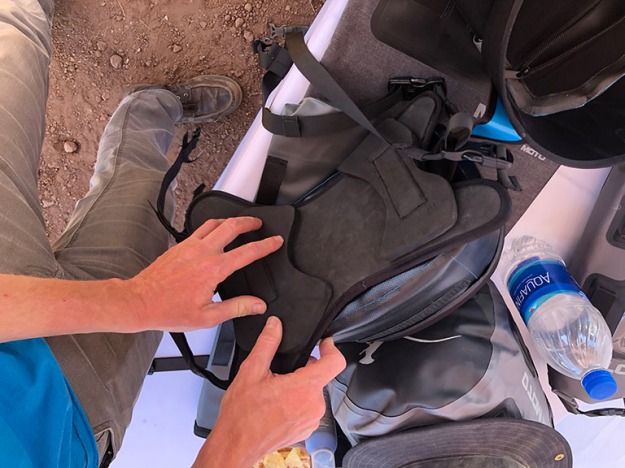 These are the wallet/cable inserts. 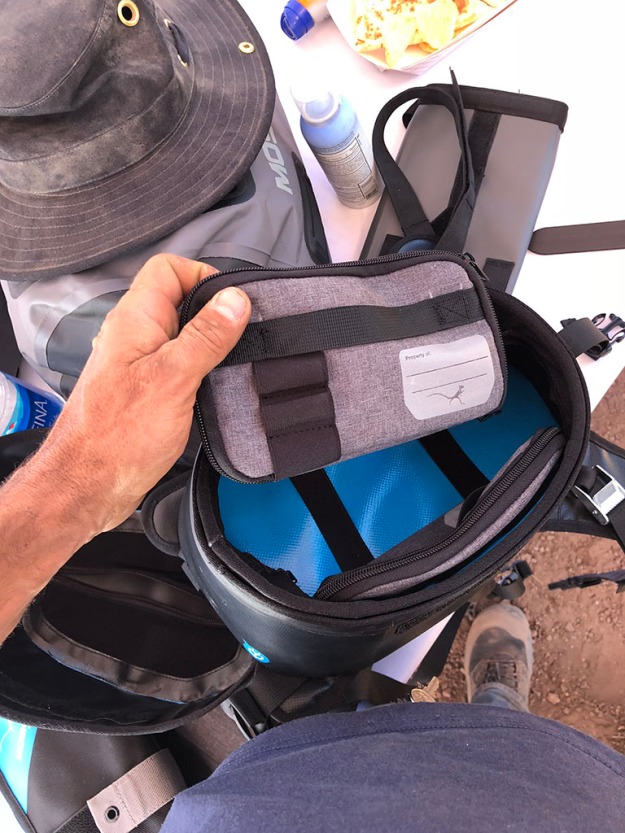 We also got the final production sample of the smaller waterproof Pico tank bag. 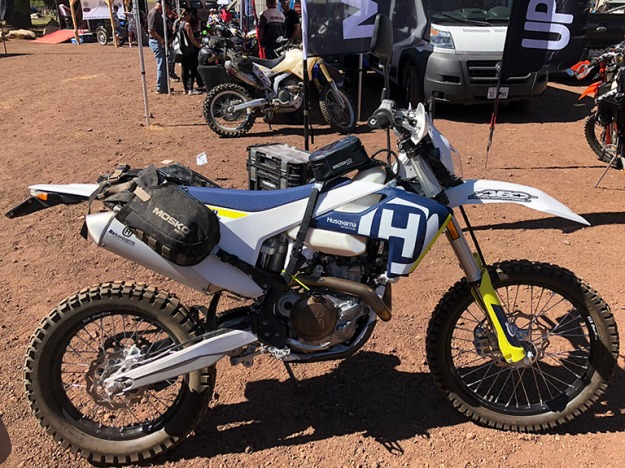 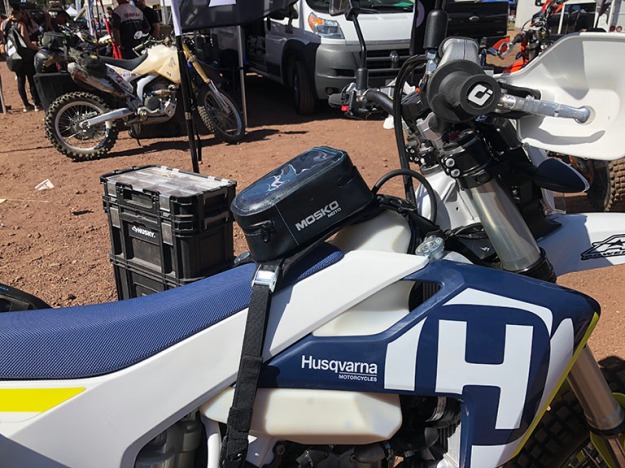 This is what it looks like with my wallet inside. 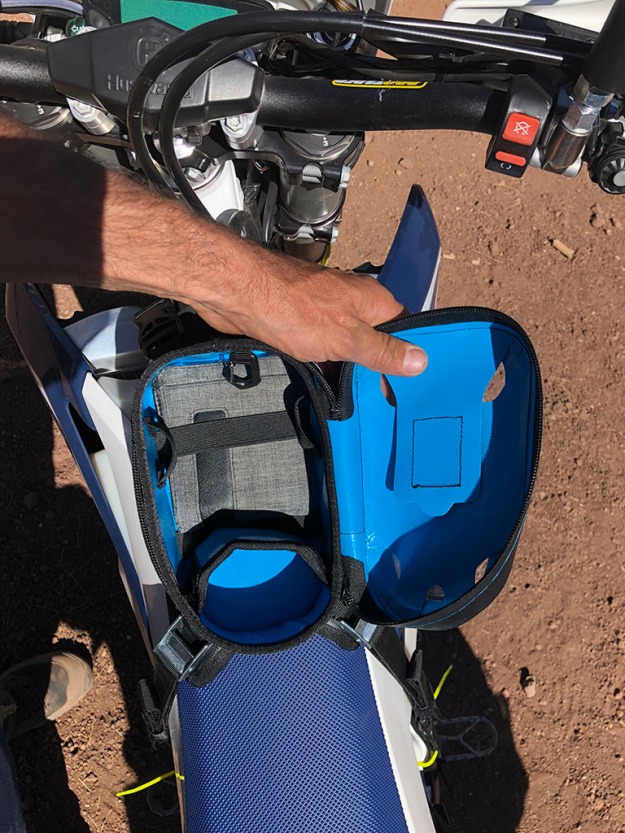 Here’s what the latest Reckless 10 prototype looks like with a chainsaw, for all the trail builders out there. 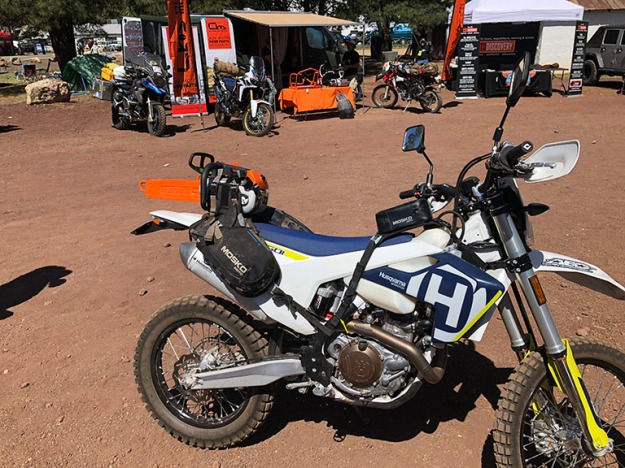 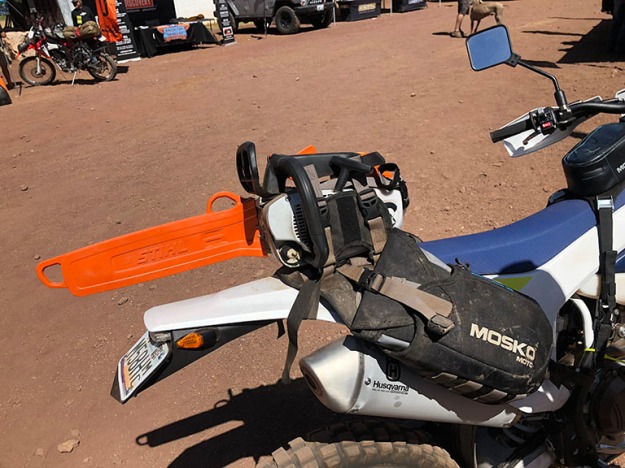 We’re in the process of switching the Scout 60 & 25 duffles to a new fabric made from PU instead of PVC. We got our protos in the new fabric and approved them a few weeks ago. These will start working their way into our inventory later this summer.

Also a new logo application on the strap, just to spice it up a bit 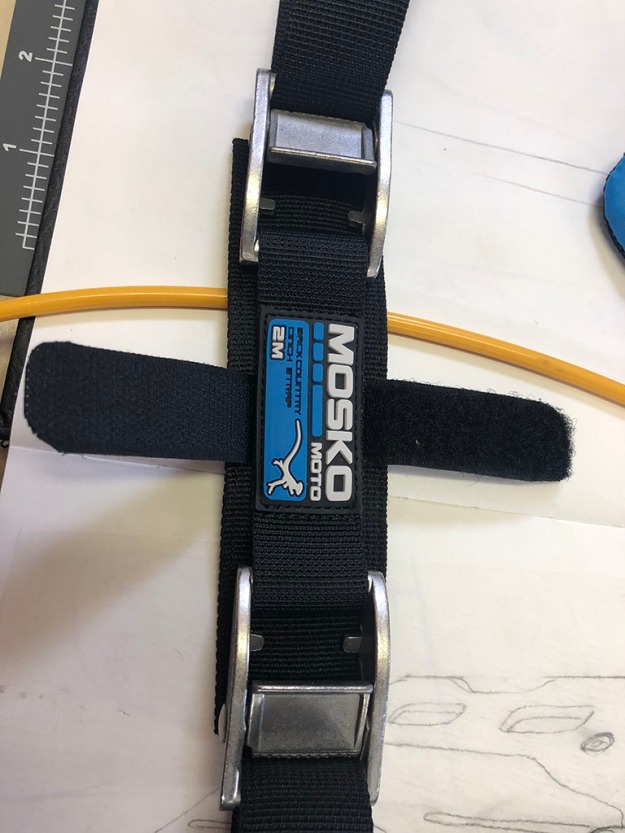 Andrew has been experimenting with this new concept to enable the R80 legs to rotate & expand/contract for different sizes/shapes of bikes.

Here Andrew is pointing out a problem we had with the leg sticking up too much and possibly rubbing on the bottom of the Stinger 22.  On the opposite side of the harness (the side with 5 bolts) is the new concept, which doesn’t stick up as much. 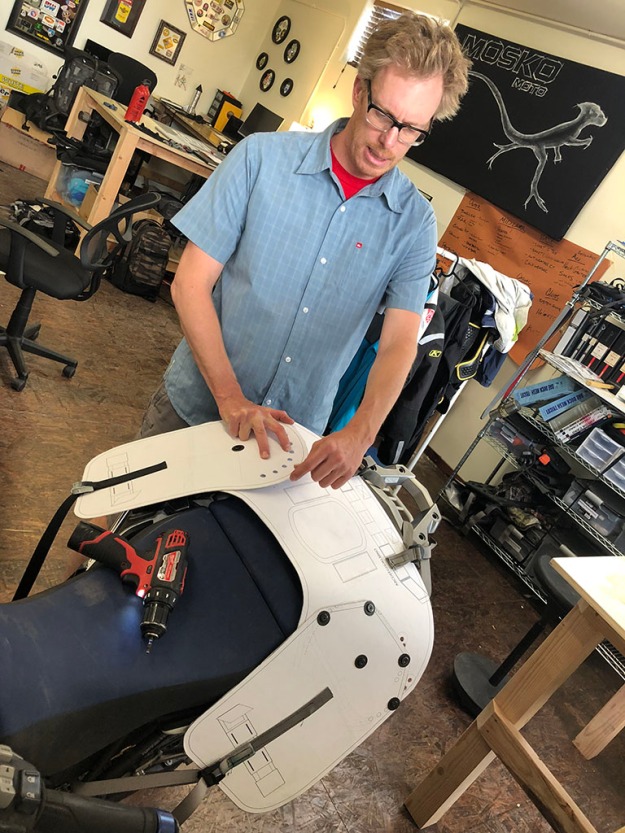 Really stoked with how this is progressing. However the changes are substantial enough that we are going back to the patterns, which means there’s still a lot of work and prototyping ahead.

Here’s a new locking system that we are considering for the BC35 panniers. This is made by a company in Oregon. It’s a combo lock on a ratchet that would replace the top-center compression strap on the pannier. It would both a) lock the bag closed and b) lock the bag to the bike. 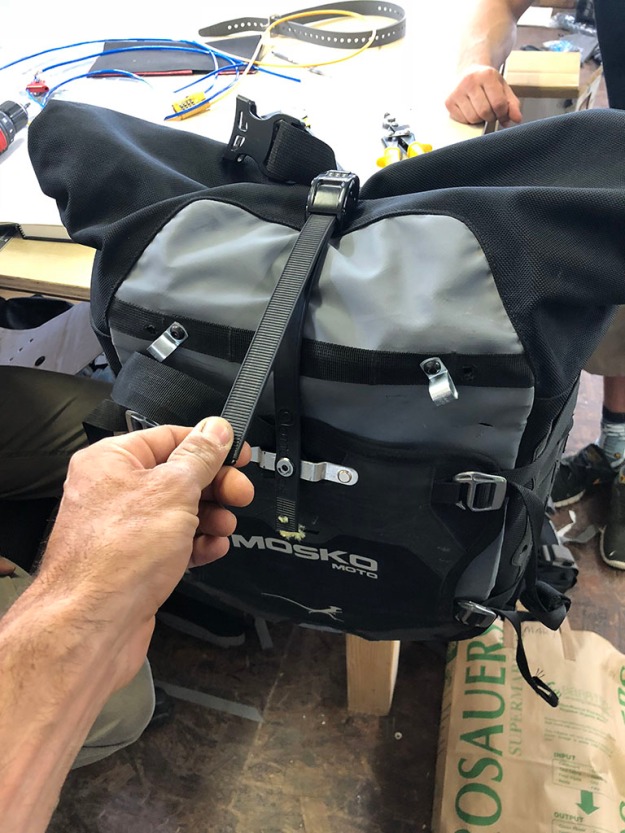 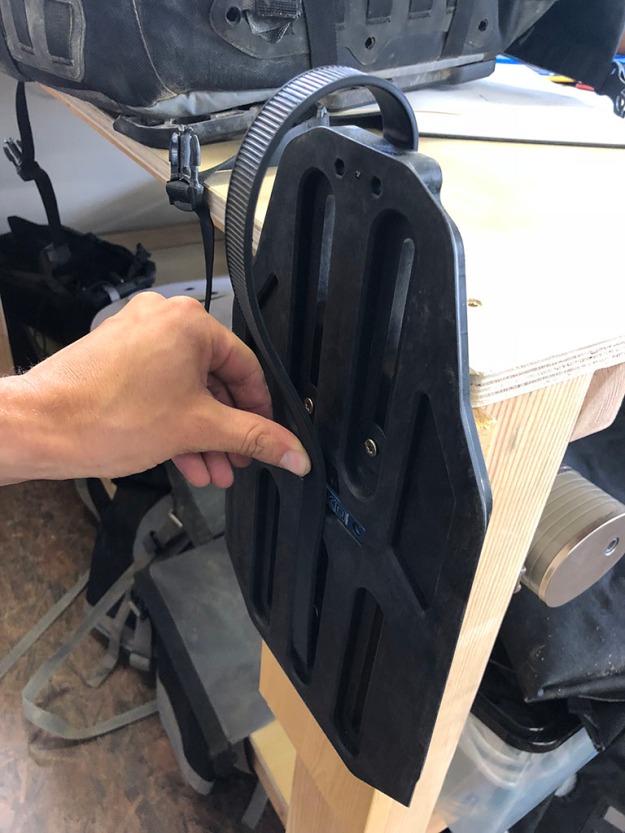 The ratchet strap has metal and Kevlar inside, and cannot be cut with cable cutters, although we discovered that it can be cut with tin snips. It’s surprisingly strong and would certainly deter a thief.

I was having some fit issues with the R80 on my KTM 690 on the last few trips. Sometimes the bag would move around a bit while riding or contact the tire when the suspension compressed. The main issue is that the R80 is designed to mount on a bike where the rear of the bike is wider than the seat, whereas many of the rear racks for the 690 are actually narrower than the seat. Also the 690 has a pretty aggressive forward lean to it, more like a dirt bike than a touring bike.

The answer is this rack extension I ordered from Perun Moto, who also makes the best rear rack for this bike that I’ve found so far. I also put the passenger peg mounts back on the bike, minus the pegs themselves, as a connection point for the R80 leg straps. Problem solved. The fuel hole lines up with the filler cap, the connection to the bike is rock solid, there’s no ‘bulge’ in the harness over the seat. Posting pics here in case anyone else has experienced this issue on the 690 or 701.

Lately we’ve been geeking-out on paddling jackets and offshore sailing jackets for ideas that might translate to moto gear. They have kind of a weird fit, but we’re trying to find one we can ride with & test. One thing we noticed right away is that paddling jackets are cut high in the back and low in the front, which won’t work for riding because water can pour down your back. So we’re focusing more on sailing jackets.

A lot of sailing jackets unfortunately have these huge neoprene waistbands that get in the way when you’re seated. Something about these jackets feels like a throwback to the 1980s… 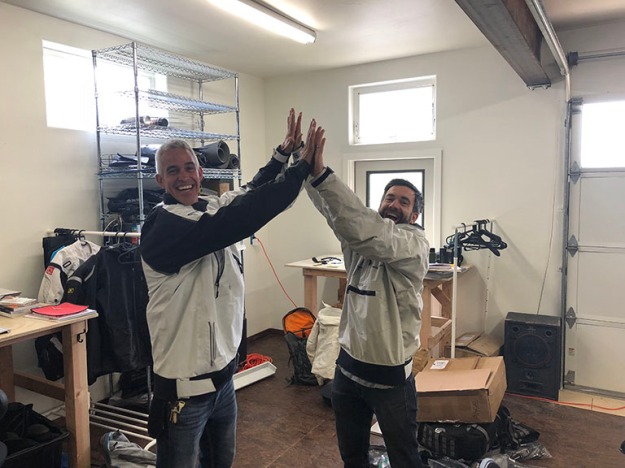 I ordered one of these from Helly Hansen: Coasting Anorak. I’ve been wanting to experiment with an Anorak-style pullover for riding for a while. They’re super simple, with minimal seams and zippers, and they pack small and light. They’re kind of a hassle to put on & take off over body armor though, which could be an issue.

Stoked to introduce Jesse to the team. He’s working at Mosko on a summer internship from design school.

One of Jesse’s first projects is this poop trowel. This is a super-strong, super-lightweight trowel designed for backpacking by The Tent Lab. It’s called the “Deuce of Spades” and it weighs less than an ounce. We want to do a version in Mosko blue with our logo. Mainly to use as an interesting promotional item, and also to offer for sale on our website.

We picked up a new company bike last week, a 2018 BMW R1200GS Adventure. This is one of the most common bikes we outfit with bags, both Mosko-branded and also the BMW Atacama bags. We wanted to have one in the shop for test fitting. And also… we get to ride it 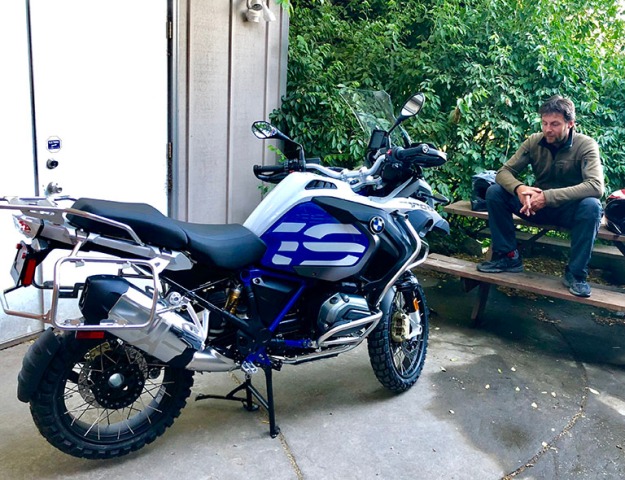 I took it out for a spin the other day and man, BMW has come a long way since my old 2003 R1150GS Adventure (which was also an awesome bike). Excited to get out and log some miles on this new one.

The UNRally unhappened… more on that in the next post